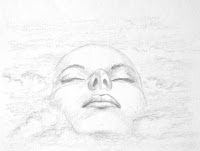 I sit alone, breathing in the silence of early morning. Outside the dawn is beginning to break. From where I sit, huddled against the cold, I can just make out the awakening light through the trees. Soon there will be bird noises. The tiny creatures will need to fluff their feathers to keep warm. They’re lucky it didn’t snow in the night although it would make a nice scene for me to look at. All my nights are spent in this chair because a recurring dream dictates that I do not go to bed. Did I say recurring? The word should be used loosely because each one has a difference.

Have you ever had a nightmare, one so scary you dare not shut your eyes again? Did you experienced the cold sweat of relief when you realised it was just a dream? That’s how it used to be with me but now… now there is no reprieve. I am doomed to spend my days and nights in fear.

It started a year ago, after the office dinner-dance. I had been dancing with the handsomest man in the party, presumed to be an invited guest from another branch of the firm. Yes, I fancied him.  And why not?  We were free agents. Newly freed, both divorced from our partners, both childless and living alone.

His name was Nick. Friends laughingly referred to him as Old Nick because he was older than most of us by about twenty years. With his dark looks, age didn’t matter. That evening I fell for the smouldering eyes and the way he held his head to one side when he spoke. You may think there was nothing remarkable about that, but you can’t see what I did. The gesture seemed inviting and I was determined to find out to what I was being invited.

I wore black that night, a strappy, slinky number that suggested more than it showed. I know he liked it by the way he fingered the straps as we danced. I’d only ever danced inches away from a partner but with Nick I was held close to his body, the way I’ve seen in films. We moved in unison, swaying, his body moulded to mine. I didn’t know I was that lithe, to be honest.

It was like that all the way through the evening. I had the greatest time and as the night wore on I began to think about what might happen at the end. Would he want to take me home? Would I invite him in? Of course, I would. He’d got me rearing to go and I was determined to see it through.

You can imagine my frustration when he left me after the last waltz. ‘Catch you later,’ was all he said before disappearing through the double doors to face the moonlit night alone.

It’s a man thing, I realised, as I lay in bed and went over the evening events. Even so, ‘catch you later’ was very off-putting. A girl didn’t know whether he meant it or if it was merely an opt-out. Later on that night I was to find out.

Nick came to me as I slept. In a dreamy state I welcomed him in my arms. It was him, yet he looked different, older. The handsome face was, well, odd. If I told you it was distorted you’d think, yeah, that’s how dreams are. I tried to recall how he looked at the dance but those striking features eluded me. Now all I could see was pockmarked skin and bloodshot eyes.

Although his suggestion that we go on a train journey was met with surprise, I agreed. How we got there is a mystery but, yeah, that’s how dreams are. We were comfortably seated in a compartment, the only two people there, when he suddenly got to his feet, dragging me up as well. The next thing I remember was being hustled along the corridor. I dropped my bag and began to fret about losing the valuables, credit card and cash, but Nick wouldn’t stop. Instead he dragged me further along until we
reached the door. The train was rocking with speed as he pushed it open and tried to throw me out.

I woke up screaming. My face and throat were wet with sweat. The duvet was on the floor, pillows strewn on top. It took a long time to regain my calm and grasp that it was only a dream.

Normally I forget dreams the minute I wake, but this one lingered.  It haunted me through the tea and toast, it bothered me while I dressed, and worried me even more when I was ready to go and couldn’t find my bag. Had I left it at the hotel? Still somewhat taken aback by Nick’s sudden disappearance I’d walked home, trying to analyse the whole thing. There was no need for money and my house key was hidden under the pot in the garden. I never took it with me when I went dancing.

The first thing I did when I arrived at the office was to ring the hotel. No, Madam, no
lost property was handed in. I went round the staff, asking questions. No, Maria, they
said, they hadn’t seen anything lying around. Perhaps you didn’t take it to the dance,
suggested my closest working companion. I was pretty sure I did.

So I reported the loss to the hotel, the office administrator, and the police.
It bothered me that I should lose a bag in a dream and then find it really was lost.
After doing the important things like notifying the bank, I settled down to work. In
fact I worked extra hard in the hope that the awful day would end quickly.

There wasn’t much of interest on television but I carried on watching until my eyes began to blur. A hot shower and an early night would be good, I thought, and then bed. I climbed in, hugged the comforting duvet to me and tugged the pillow into position, then went straight to sleep. For once my overactive thoughts left me in peace.

He came again that night, his presence announced by repeatedly uttering my name. Ma-reee-ya, Ma-reee-ya. It made me shiver. He was dressed in black with a white silk scarf knotted at the neck. Facial growth covered his chin, dark whiskers that made him look older than his years. His distorted features were now quite grotesque, sunken cheeks, a lopsided nose, swollen lips, one eye open, the other closed. He was friendlier than before, although his grip on my hand was vice-like as he invited me to accompany him for a walk.

Because the evening was on the cool side, I slipped a shawl round my shoulders. Agift from a friend, beige coloured, embroidered with peacocks and my initials MD in the middle.  We took the path that led to the lake, pausing now and again to kiss, and for me to suffer the rising nausea each time he pressed his lips against mine. I had no choice but to surrender since his hold on me was like steel. I remember it so well. I also remember his hysterical laughter as he pushed me into the lake.
Struggling to keep my head above the murky water, I screeched and screeched that I couldn't swim.

Then I woke, still shaking with fear, horrified to feel so drenched. My rose patterned nightdress was soaked with perspiration, the duvet wrapped so tight I sweated with the heat.

And so it goes on. Every night he tries to kill me, each attempt different to the last. His face is skeletal now and the more gruesome he gets the worse the torture.  The fear is so great I am afraid to sleep lest he should succeed.

The man called Nick, whom I met at the dance, rang me not so long back. He
apologised for leaving me so hurriedly and suggested we meet up for a night out. I
turned him down. I could no longer be sure if he and my ‘dream’ man were one and
the same.

The psychiatrist had lots of explanations about my state of mind, none of which I understood. I mean, I was normal before all this started. Wasn’t I? Anyway, the psychiatrist reckons that dreams are figments of imagination. You know, I would believe that if it wasn’t for the fact that my handbag was found beside a railway line some 90 miles from where I live. I suppose someone, somewhere, is wearing my lovely shawl since it is nowhere in the house and I am not careless enough to mislay
things without knowing.

So I sit here breathing in the silence of early morning. Outside the dawn settles in. From where I sit, huddled against the cold, I can see sunlight filtering through the trees. Soon there will be bird calls. They are lucky it didn’t snow in the night. It doesn’t matter to me; I’m too tired to go out these days. Since sleep is something to dread I sit here, alone with my thoughts, and wonder how much longer I must exist in this dream, doing nothing else but link figments of imagination until they resemble
life as it was.

If I could differentiate between fantasy and reality things would be different. Maybe I should turn the tables, take the lead, form a plan; a successful one. My best friend thinks I am incapable of rational thought; she may be right but it would be good to try and prove her wrong.

Elusive thoughts often flutter through my head, ideas on how to bring an end to this mental incarceration. Perhaps I should not have turned Nick down after all. Maybe a daytime rendezvous would help me see things more clearly. What’s that old adage? Do unto others as they do unto you? Ah yes, now we’re talking!

It’s quite light outside now. The birds are fighting each other for food. A woodpigeon lands on a slender bough in the cherry tree, seesaws until the branch settles A feral cat lurks behind the hydrangea; watching, waiting; food for a week. I too am watching … and waiting. A chance is all I need, I think, as I turn to gaze at the phone.