It was a surprise to have a St John's Ambulance man knocking on the door during the recent winter weather.   He was visiting people to check that they were coping okay in our snowbound area. People in the road I live in are predominantly old folk (koff koff) so it is heartening to know that people care. The cynic in me says the visit was an ideal opportunity to obtain contributions, but deep down I know that without such professional organisations a lot of people would suffer even more.

Years ago, what this guy did was automatically done by neighbours. Now, people are lucky if they even see a neighbour from one week's end to the next. People have their own lives to lead, they don't 'neighbour' anymore, not even to borrow a cup of sugar. It's often a case of I'm alright, Jack! Of course, it depends on the area in which they reside, some districts are more neighbour friendly than others.

The saying goes that only if someone has children or pets do they get to meet others with children or pets. Dog walkers make friends easily, and taking kids to school guarantees bumping into other parents, but if you have neither kids nor dogs the reasons for going outside the four walls are greatly lessened. Imagine what it will be like in the future when even the shops don't get visited, when internet buying becomes the norm. 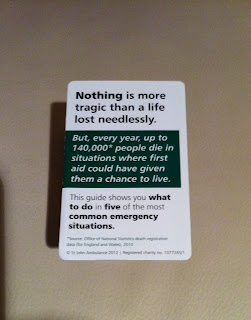 Before he left, the St John's man gave us a useful leaflet, folded to credit card size, which contains useful information in case of such emergencies as a stroke, heart attack, choking, bleeding, unconsciousness, or if someone has stopped breathing. Methinks I should read thoroughly in case one of the above occurs, I mean it would be awful in one of those situations to waste time reading up on what I had to do! 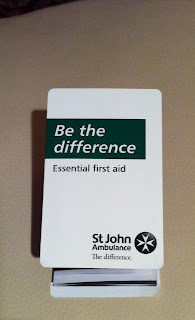 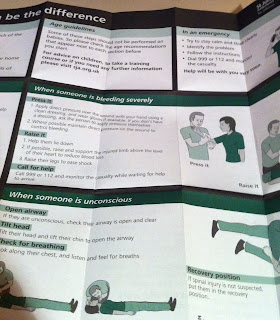