It is years since I had a bath but perhaps I should reassure you that I am not smelly. Years ago, I stopped bathing and resorted to [plenty of] showers for the simple reason that once down I couldn’t get out. Joe was more agile but even he began to have problems. So for the last three or more years I have climbed into the bath to take my shower. Actually, I can still do that but as the years go on it will be impossible even to swing a leg over the side of the bath. It dawned on me that I had to do something about it before it was too late.
How about one of those popular wet rooms with a shower, I thought, and nursed the idea for some time. Eventually I decided to go for it and started to look round and get some quotes for the work. A lot of companies were willing to do it – without question – but the one I chose explained it in more detail. To start with, a wet room needs space which was something I hadn’t got. I had thought the bath being removed would be sufficient but what would I know, I’m not a plumber!
I ended up engaging a company to put in a ‘tray’ with stool and small screen. Mike (the rep) included a new shower and tiles with which to cover the empty wall space. Then there was the matter of the flooring, which I hadn’t thought of. We had carpet! Okay don’t tut-tut, please remember carpet was the thing to have once upon a time – maybe a few generations ago. Progress was slow in my house! 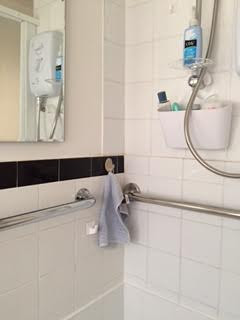 Some of you may remember me having new flooring in the hall. It struck me that the same kind would look good in the new shower room. The expert agreed, so I contacted the guy (Alex) who did the hall. Yes, he would do it. He would also liaise with Mike who had said the first layer of flooring needed to be done before fitting the ‘tray’ after which the floor job could be finalised.

It’s was all very technical. I could only hope they knew what they were talking about. Between them they seemed to have got it sorted.
Moving on:
The job is done………. and I am thrilled with it, even forgetting the obstacles I had to overcome. 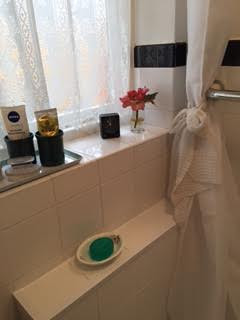 The day the workmen finished their part of the job, Alex came to do the flooring. Being impatient I couldn’t wait to get the knickknacks back in place and enjoyed making the room look lived it. In and out I went, until I fell over. Wearing silly sandals I tripped at the door, an unlevel patch which once had a door strip but now awaited a new one. Trying to save myself made the fall even worse. Let me tell you that ribs smashed against a wooden door frame is no joke. I’m hobbling around aided by a walking stick, although on this the second day the injury feels ever-so-slightly better. 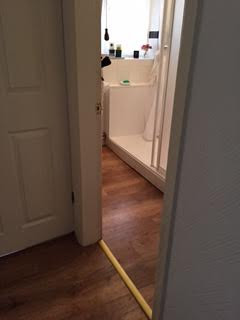 Alex was brilliant, he made tea and kept checking on me while laying the new floor, making sure I was okay. I was, sitting down! One thing I know is that there are still some kind people in the world.
I miss the bath, though. Already I can see there are habits that have to be changed. I used to sit on the side of it to do my hair etc, now there is no bath to sit on. I used to lean on the bath to reach something on the window shelf, now there is no bath to lean on. It's a case of starting again but I am mindful of the old saying 'old habits die hard'. I can't wait for the newly ordered bath stool to arrive from Amazon.
Valerie
Posted by Valerie at 07:00