Then there were three...

It must have been the excess of grapes that had me up in the night. I suppose it served me right for pinching them off the kitchen table. I wasn’t the only one up and about, old Owl surveyed the scene, looking for possible captures, while in the near vicinity his mate hooted and the fox hunted, his eyes lit up by the moonlight.

As I crept back through the hole in the barn door I heard Ginger snoring. He was galloping in his sleep like he was chasing something. I wondered what it could be; a mouse, or perhaps one of the cats had taunted him and was being chased away.

Although Ginger got on well with animals and humans he didn’t seem to relate well to cats, that is until two males were brought in to help keep the mice at bay. I suppose it was because they were now part of the farm that he made the effort to be friendly.

The cats had silly names, the lean black and white was called Stringy and the huge tabby was laughingly called Moses. Gaffer suggested Missus changed their names to something less comical but Missus said she thought it would be a bit of fun to keep what they already answered to.

The two cats were fairly friendly towards each other but occasional squabbles broke out. If one tried to sample the other’s food there would be lots of hissing and chasing, while a bewildered Ginger looked on. I didn’t stand any nonsense; if they started a power struggle in front of me I put my paw down hard on one of their heads.

Apart from all the night noises everything was peaceful so I curled up on the hay and covered my eyes with my paw to shut out the moonlight that came through the window.

The whistle woke me with a start. The huge green monster that rushed through fields and over a distant viaduct first thing in the morning always issued a shrill shriek as if saying it was time to wake up. Beside me Ginger gave a low growl; without fail he complained like that whenever the train went by. Well, I thought, I suppose that’s it, I might as well get up. But strangely enough Ginger didn’t bother. Instead he stood up, turned round a couple of times as if searching for a comfortable spot, then sank down on the same section of hay he’d been lying on before.

I wandered outside to check the food bowls by the kitchen door, just in case Gaffer had thought to get up early. I wasn’t disappointed. Next to the water trough there stood two shining enamel bowls filled with food so I barked a couple of times to alert Ginger.

It was at that precise moment that the kitchen door flew open and Missus flew out, shoving me to one side as she loudly proclaimed that she was late. Late? Our breakfast meal was already loaded into the bowls so how could she be late?

Gaffer wasn’t far behind; he came out armed with a small blue case and clutching a brown wallet. I was mystified … surely he wasn’t late as well?

Ginger arrived on the scene just as Gaffer and Missus got in their old car and raced off. He looked at me, and I looked at him. Both of us gave a worried woof before heading over to the bowls of food. Whatever was going on, it was better for us to keep our bellies full. With them going off like that who knows where our next meal would come from.

It wasn’t long afterwards that Gaffer’s car squealed into the yard. Ginger and I were on our way to the stables at the time but we stopped to look. Gaffer drew up beside the kitchen door, and whistled for us to go to heel.

‘Bet you lads wondered where I’d gone,’ he said, rubbing our backs as if he’d been away for a year.

I licked his hand and looked up expectantly, hoping he would enlighten Ginger and me about what was going on.

But we weren’t told, all we knew was that Missus had gone visiting. My guess was that she went on the train since Gaffer had come straight back to the farm. This meant, of course, that we had free rein, and so did Gaffer.

Every afternoon for a week we went long walks, sometimes using the car to get to somewhere different and then running our legs off investigating and sniffing out new land. It was on one of our afternoon treats that we met Susie, a young English Setter.

We hit it off straight away. Ginger liked her as well, he was always trying to get her to join our games of chase but Susie was quite refined for a young dog, she seemed to prefer watching us. Privately I thought Ginger’s constant fidgeting put her off.

Susie wore a white collar with silver markings that gleamed in the sunshine. It really suited her silky white fur. She belonged to a young farmer named Bill and lived in a very smart wooden kennel beneath a sturdy Horse Chestnut, with a long knotted rope hanging from its lowest branch. I anticipated lots of fun playing with that.

Gaffer took us there quite a lot in the next few days. Seems he had quite a business to get through with Bill. While they were seated at the kitchen table, their heads bent over lots of papers, Ginger, Susie and I played with the rope, then we’d scarper into the adjoining woods. Bill said we were quite safe because the whole lot was enclosed by fencing.

There were lots of things to excite us, woodpigeons to chase and the odd feline that skipped up the trees when we came along. Rabbits scampered in and out of burrows and I had great fun chasing a hare. It was touch and go who would win but he always seemed to have a head start. But the best of all was fishing in the pond, watched closely by Mr Kingfisher. He would dive to catch the fish I was trying to trap with my paw.

Ginger spent all his time playing with Susie and when they were near her feeding bowl she would paw some of the meat and offer it to Ginger. Pathetic, I called it. No upstanding dog would do such a scandalous thing.

Apart from that, when it was time to leave at the end of the week I felt quite sad. Gaffer said Missus would be home the next day and he had housework to do, which meant time in the Dolly’s stable for Ginger and me and no more visits to the farm.

It was while we were getting ready to depart that Ginger and I learned that Susie was joining us in the car. Apparently she was coming to live with us. We were delighted, of course. Ginger especially. The change in him was so noticeable … whenever Susie was near he couldn’t leave her alone. He was still my best friend but I suspect he had fallen in love with the glamorous Susie.

Missus was delighted with the new arrival. She’d bought new collars for us, a studded leather one for me, a woven chain and leather for Ginger and, would you believe, a new name tag for Susie. So she must have known before we did that Susie was coming to live on the farm.

Susie fitted in very well. We shared and shared alike, none of us ever taking advantage over the others. I could see happy times ahead. I wasn’t jealous that Ginger was besotted with a bitch of his own kind … after all, I had Chicken Fingers as Gaffer, Ginger and Susie as best friends, and Dolly too. And now that Missus had got used to having me around, my life was settled. I just hoped the cats would remember to keep the mice at bay. 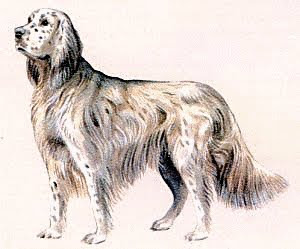 This is the last one, folks. Seven parts, all done and dusted. If you want to read any part again you're welcome to visit the new blog It's A Dog's Life.

Email ThisBlogThis!Share to TwitterShare to FacebookShare to Pinterest
Labels: Then there were three...