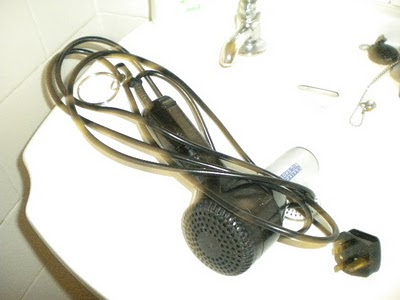 Talking about hair dryers… well, the subject did come up when I was in a panic over a recent parcel delivery.

This particular tale goes back several years when Guy and I went to Blackpool to see the famous illuminations. We hadn’t been married long so everything we did had a sort of rosy hue … a weekend in Blackpool, we thought, would not only be romantic but would help recapture our youth.

In our youth the only place to stay in Blackpool was a bed and breakfast somewhere near the sea and within easy reach of the legendary Pleasure Beach (for the benefit of overseas readers, that’s a huge fair) and Blackpool Tower (similar to the Eiffel but not as tall). It was with many private memories that I embarked on the trip but I won’t elaborate on those, save to say that girls will be girls when they’re let loose.

On arrival we started the hunt for accommodation. Most places were full but further back from the sea front we found a nice looking place, clean and tidy and respectable looking, with vacant rooms available. Considering the lateness of the hour we were lucky to find it.

The landlady was a cheery soul. She gave us such a hearty welcome I immediately relaxed. I felt suddenly excited and couldn’t wait to deposit our bags and go out into the night to see the illuminations.

By the early hours of the morning, after completing the Golden Mile course, travelled on gaily decorated trams, exclaimed at the wonderful sights, rode in a landau, marvelled at the animated animals and cartoon people, and shivered with cold, I was more than ready for bed. We ambled, foot sore and weary, back to the B&B.

Our room wasn’t bad, a bit on the gloomy side with dark floral wallpaper and dark brown painted woodwork, but there was some light coming through the naked window. At home I wouldn’t dream of leaving windows unadorned but right then I was too tired to bother about anything other than falling asleep. I positively dived into bed…. a well worn double with a full length, well worn hollow in the middle of the mattress, a trench deep enough to hold a body. MINE! Most of the night was spent trying to stop falling into it. If anyone is ever faced with the same problem, remember that hooking toes under the side of the mattress is about the only way to stay on top, pardon the pun, unless of course someone knows better.

Next morning, with limbs stiff as a board, I climbed out of bed thanking the good Lord that we’d only booked for one night. I’d had about two hour’s sleep in total and my mood was murderous. I just hoped breakfast would improve it.

However, before breakfast I had to do something with my hair. All that tossing and turning in the decrepit bed had done little to make me feel on top of the world. My hair was a SIGHT. Fortunately I’d taken my trusted hair dryer so everything should be okay once I’d done a restyle.

Except there was no mirror and no plug socket to be seen.

I hunted all over the room, getting more and more crabby as time went by.

In desperation, because time was getting on and Guy wanted to go down to breakfast, I damped the hair down and HOPED FOR THE BEST. A mirror would have told me that my hope was not realised. Guy said it looked okay but what would he know … he’s a man.

So, downstairs we went, Guy first with me trying to hide behind him. The dining room was light and airy compared to the bedroom; you’d have thought we’d inadvertently moved into a different B&B.

‘Bacon and eggs?’ yelled the landlady from the kitchen area. ‘Sit yourselves down.’

I headed for a side table that would reduce the view for other occupants, keeping my head low to hide my shame. I just didn’t want be seen by the general public as a wild haired specimen from alien parts. By the time breakfast arrived at our table more guests had arrived. I got a strange stare from an elderly man and wondered again about the hair, anxiously smoothing it down in the mistaken belief that it would improve the image.

The food wasn’t bad and actually the atmosphere was quite positive, people chatting about the illuminations and making plans for their day. One couple complained about the lack of electricity in their attic room which made my lack of plug socket seem fairly amusing. I mean, plug or no plug, if there was no power I would still have been in a dilemma. When you think of the amount of power used for electrically run trams, the illuminations, the fairground rides, it was little wonder that an ordinary B&B had to do without.

Chewing bacon, I gazed at the wishy-washy fried egg and wished I was back home. I was at the point of selecting a toothpick from an empty shrimp paste jar on the table when I noticed a bit of a hush. And then I heard a booming voice right next to me……

It was the local photographer.

Landlady called out that the photographer always took photographs while the guests had breakfast.

I ranted, ‘Not this guest, he doesn’t,’ before racing out of the room.

We’ve laughed about it since. Recapturing our youth hadn’t been achieved and I wouldn’t recommend it to anyone unless they go accompanied by an electric generator and a bag of tools. Oh, and a mirror!
Posted by Valerie at 15:19