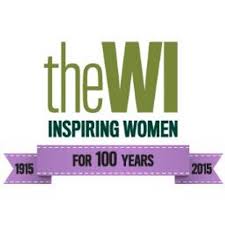 The Womens Institute is 100 years old this year and lots of events have been planned to celebrate its centenary. The main event was the official Annual General Meeting held at the Royal Albert Hall in the presence of Her Majesty The Queen, the Princess Royal, and the Duchess of Wessex, all of whom are WI members. Sadly I was unable to go this year because, in case you don’t know, the Albert Hall is a circular building and there are rather a lot of steps to the seating areas. I’ve done it many times but this year I felt unable to tackle the up and down climb. Not to worry though, I was able to watch the event on the internet – a live broadcast seen via YouTube.
Here's a video clip of the singing of Jerusalem, which is the WI's 'anthem'. Don't worry, it's only the singing, not the whole programme! Singing in the Albert Hall with so many women is an emotional experience and I always got a bit dewy eyed when I was there. The first person you see is Janice Langley, WI's current National Chairman. You can see the three royals joining in. In the middle of the video is a picture of members singing in their own institute, the institute being the first one to start in this country - all those years ago. One of the members from that institute and one from a brand new institute were detailed to perform a particular task... you can imagine how thrilled they were, especially the new girl.

Another event was a garden party held at Buckingham Palace the day before. The Duchess of Cornwall presided. One member from each WI (making thousands) was invited to attend but no-one from my institute wanted to go. Understandable when you think of the unearthly hour the journey had to start, all the travelling, then arriving home at some ridiculous hour later the same day. Or, as some did, go to the garden party one day, stay overnight somewhere, and move on to the AGM the following day. A lot of us are past making such efforts – even for the Queen. Or WI!
There was an amusing incident which occurred a few weeks prior to the garden party. I received an email from someone called Joanne who worked at the local Hotter Shoes shop. She had heard about the event and was offering our, what she called, lucky lady a free pair of shoes to wear on the day. Damnation, and me NOT GOING. I guess I could have pretended but I don’t wear Hotter Shoes anymore.

Enquiries were made and I discovered a colleague from a local institute would be attending the garden party. I gave her a call. Needless to say she was delighted, although her husband was a somewhat hesitant about what he thought was a catch. We all know that people don’t offer anything for nothing unless there’s something in it for them. Anyway, it transpired that all they required was a photograph for advertising, one taken on the day. I don’t know the outcome of that but I did hear that my colleague wore the shoes all day and was VERY pleased with them. She had even bought a handbag to match. That’ll teach me not to attend these things!