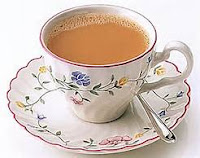 I thought I would give you a funny…. at least I found it amusing which under the circumstances is a good thing. It goes like this….
Lately I have had trouble with tea, rather the placement of same. I have three kinds in the kitchen, peppermint, lemon and ginger, and ordinary everyday tea. The peppermint is for after dinner, lemon and ginger is an early morning drink and the ordinary tea mostly for visitors, although I had started to have a cup in the evening because someone told me I should drink more milk! Go on, have a laugh. Seriously, though, I can’t drink milk on its own. As for the variation in tea, well, I used to drink only lemon and ginger but the peppermint crept in as a cure for indigestion. I actually gave up the ordinary everyday tea because I gave up milk. Are you with me, so far?
So, what’s the problem, I hear you ask.
The four containers looked good as a group so they were always kept that way, and later joined by the two extra pots for herbals. I have a stupid streak for things looking nice and rarely change them. And that’s how it stayed for several years … until the age thing occurred. 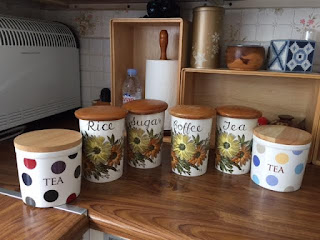 I tried hard to get it right but more often than not I would select the wrong one simply because they stood together, shoulder to shoulder in attractive containers that once belonged to my mother and which I liked enough to keep. The problem needed urgent attention and I came up with the answer: separate them and put them where needed most. I did. In fact I had a complete overhaul of stuff in that area.
Every time I examined the contents of a cupboard I would decide that they would be better elsewhere. Of course, that meant finding a new home for the stuff I was turfing out. I adopted a practical and sensible plan for all categories, a plan that would save time and energy. Take tea, for example. Tea is better located near both pot and kettle, food related items near the preparation area, etc. It was great fun sorting it all out and I wondered why I hadn’t done it years ago.
Now I can’t remember where anything is! Yep, it’s banging head time but never fear I WILL sort it. Watch this space in about six months to see how I get on.
Valerie

Email ThisBlogThis!Share to TwitterShare to FacebookShare to Pinterest
Labels: tea and teapots