STRIKES, I HATE THEM

Where I live there has been a rather long strike of bin men refusing to work because of some dispute over working hours, job changes and redundancies. It has, of course, affected the public, but it seems we don't count in this disturbance. All trash, including garden waste and recycling materials, is no longer collected. Well, I lie, some men did come to collect stuff but they weren’t legitimate refuse collectors. They worked for the council but not on the bins and they did it to remove stuff from the roads. The worst of it is that the strike is likely to go on until Christmas which has most people crying 'Heaven help us'. 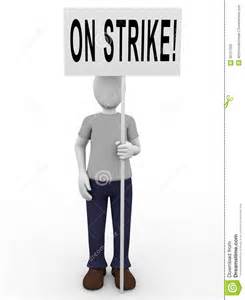 Some folk in neighbouring areas just throw out their rubbish, making no attempt to bag it properly or at all with the consequence that they became inundated with rats and other undesirable creatures. I was furious when I read about it. It doesn’t take a minute to bag anything that would encourage wildlife, or seal stuff to stop smells. As my neighbour said, they don’t all think like me!

It has been several weeks now and my road is still a picture. You wouldn’t know there was a strike on. Why? Because people here are proud of their environment and make every effort to keep it clean and tidy. Our wheelie bins are carefully filled, boxes are folded so they fit into the bins, plastic bottles are squashed down to nothing, and food leftovers are sealed to avoid foxes getting the smell.

Our televisions are full of pictures like of other areas and the mess residents have made. You would think their roads were actual tips. 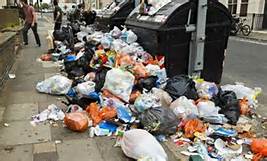 I was so incensed by the reports of constant bickering and apparent helplessness in other areas that I sat down and wrote this for insertion in the local newspaper.

“At this time of strikes and turmoil I feel compelled to write in praise of the majority of residents in Sutton Coldfield, in particular Conchar and neighbouring roads. Throughout the upheaval caused by the current dispute between bin-men and council we have seen pictures and film of the rubbish left on streets. It is noticeable that bags of rubbish are thrown on heaps, along with discarded boxes etc, without any thought that we, the public, might help to tidy things up. This is not in support of strikers but for our own feeling of well-being.

Not once in all the weeks of upheaval has rubbish been dumped on the road where I live.  Admittedly some residents dispose of it by taking it to the proper refuse collection points, but not everyone can do this. Instead they tidy things up. What is to stop others from flattening boxes or indeed cutting them so they lie flat. Most of us do this anyway, strike or no strike. It takes no time at all to make disposal easier by securing bags so that nothing falls out or pack them so they fit into wheelie bins. We do it anyway, strike or no strike. It’s all a matter of pride and common-sense.” 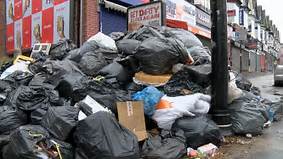 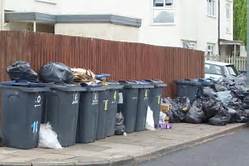