Dare to be Scared (by special request) 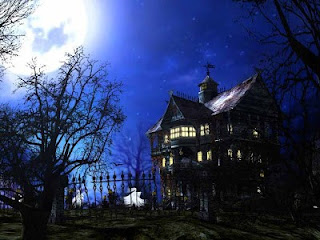 The room was cold. The fire, now no more than dying embers, made the fireplace look like a cavernous hole surrounded by a black marble mantelpiece. The unfinished drapes hung at the window awaiting final measurement. In the swelling silence Ellie Peterson was thankful that she couldn’t see outside.

An hour ago the sound of footsteps had unnerved her. Petrified she had waited for the door to open but nothing happened and the footsteps died away. Now, except for the creaking stair, the house was eerily quiet. She sat on the hard wooden settle, her body taut against the high back, feeling the terror in her spine. Dare she move? Would the spirits know of her presence if she did?

She wanted to believe the occupants had returned but they knew she was there so they surely would have called out. Her mind switched. Maybe it had been a burglar. If it was he was being terribly quiet. There were no other noises to indicate that drawers were being searched or cupboards ransacked.

The New Year’s Eve party seemed so long ago. The usual gang had turned up at Lacey’s Wine Bar with one extra, a boy called Ram who told stories about ghosts. While they drank in abundance someone mentioned the big house on the hill, saying it was haunted.

Ellie was taken aback for that house was where she would soon be working. The owner had commissioned her to replace the drapes in the dining room while the family was away in Tobago. In a mildly drunken state, she had scoffed at the suggestion of the place being haunted, saying it was all nonsense and bragging that she wasn’t in the least scared of ghosts. She didn’t mention that as a child she was scared to walk past the turreted property in case the ghost came out to get her.

It was Tom who dared her to spend the night there. Ellie had laughed and joked that she wouldn’t mind spending several nights there. And so she was dared so to do.

She had telephoned Jacqueline McCleary the next day, asking for permission to stay until her work was completed. It would be so much better, she’d said, if she could devote all her time to the task and not have the inconvenience of travelling to and fro. Mrs McCleary was delighted, saying it would be useful to have someone in attendance during her absence. She would make up a bed in the west wing.

Ellie remembered trembling with the excitement of spending nights alone in a supposedly haunted house. Now she trembled with fear in the icy room.

The musty smelling room was lit by a dim lamp on the antique bureau, out of reach from where she sat. She couldn’t remember putting it on but she did recall switching on the central chandelier before lighting the fire, then switching it off because the light was too harsh. Although she didn’t doubt her action she looked up, seeing only flickering firelight reflected in the clear glass. But the fire was dead and she half wondered if she was too.

She twisted round to check the door, wondering if she had the courage to go into the huge, cold hall that led to the west wing. She decided against it. It would be better to stay where she was, maybe close her eyes and try to sleep. The hard settle didn’t encourage sleep but she was too afraid to move to the comfort of an easy chair. Folding her legs beneath her, she eased the tartan blanket over her arms and prayed for daylight to come, wishing she’d ignored Tom’s stupid dare.

Outside the wind howled and rain lashed against the glass. The chandelier shook and the new drapes swayed in the half light. In a room in the west wing a shadowy figure rose from a winged armchair. Her skirts floated behind her as she noiselessly glided through a heavy wooden door that led to an imposing staircase. At the top she paused and listened as the first musical notes filtered through the air.

Ellie stirred, shifted her position on the settle. In the distance she heard faint music. It took her straight back to her childhood, when she’d been so afraid. Straining to listen she became aware of an indistinct soprano voice intoning the words of The Londonderry Air.

Oh Danny boy, the pipes, the pipes are calling
From glen to glen, and down the mountain side
The summer's gone, and all the flowers are dying
'Tis you, 'tis you must go and I must bide.


Ellie shivered as the eerie singing grew louder, swallowed to suppress a ripening scream. Somewhere in the back of her mind was the thought that spirits didn’t like screams and anyway, wasn’t she a grown up, sensible person who wasn’t afraid of ghosts? Hadn’t she said so repeatedly before… before coming here?

The crash completely unnerved her. It sounded like something smashing against the far door. Hardly daring to breathe, Ellie pulled the blanket round her shoulders and slid from the settle, grabbing the wooden arm to keep from falling. Against her better judgement she felt she had to investigate? Fearfully, she tiptoed across the polished floor and eased the door open.

On the floor was the oil painting that had been hanging in the hall, to the right of the door. Its heavy gold frame was broken, the glass lay in smithereens, but the picture seemed unmarked. Inches away lay the picture hook complete with fixtures, the screw ends coated with plaster. Ellie stooped to examine the painting, a naval officer. His stiff posture and stern expression was a little forbidding as he sat on a long wooden bench. The name at the foot of the painting indicated that this was Daniel McCleary, presumably a family ancestor Behind him, one hand on his shoulder, stood an attractive lady dressed in grey. Ellie stretched out an arm to touch her solemn face. The eyes seemed moist as if tears were falling. So sad, she thought, as she made to wipe them away. Ellie shook herself, reprimanding her foolish imagination.

Unsure about how to cope with the picture at that late hour and reluctant to delve further into the mysteries of the house she returned to the room where she had briefly slept. In the morning she would clear up the mess.

Sitting again on the settle she let her mind drift back to the picture, remembering the story of the young diva being killed, stabbed by her lover. So much for respectability, she thought.

Light was beginning to penetrate the room, making the shadows seem less creepy. Soon she would hear the dawn chorus; only then would she be able to relax. Ellie thought about the picture. Knowing she would have to explain to Mrs McCleary filled her with trepidation.

As more light seeped in Ellie found the courage to move about. Throwing aside the blanket she went to draw the curtains. She had to admit they looked good; the burgundy velvet went really well in the room. Since taking the commission she had worked hard, sewing well into the night on some occasions. Now all she had to do was measure and complete the hems. She would start early, after a drink and maybe some cereal. The need to move on with the work and leave the house couldn’t be ignored. But first she must clear up the mess in the hall.

Ellie stretched and yawned and tried to suppress a sudden desire to sleep, a long sleep in her own bed, in her own apartment. A cup of tea would revive her, she thought as she moved towards the door, reminding herself to tread carefully to avoid the broken glass.

Somewhere in the distance she heard a tinkling laugh that seemed to echo through her head, a young voice. Braver now the gloom had dispersed, Ellie flung open the door, stepped into the hall, prepared to see an expanse of broken glass on the floor. But there was not one sliver to be seen. Looking up, she saw the picture on the wall. Intact. Except that the man now had streaks of blood on his face and at his side the young lady smiled.

Completely disregarding the waiting drapes Ellie Peterson fled to the sanctuary of the outside world.