Parking the car was no problem this morning. There was a distinct lack of vehicles so I guess the intense heat was keeping everyone away. As always I needed to use the lift to get out of the car park and was joined by an elderly lady in a wheelchair and her daughter.
‘Lovely Day’ said the daughter, ‘but I am NOT moaning.’

She was on her own then, because everyone else was complaining about the heat. I could see what she meant, since we’re a nation of moaners. We grumble if it’s cold, we whinge if it’s wet, and, yes, we whine if it’s hot. There’s no pleasing some folk, me included.

The lift arrived at the ground floor and together we made our way out. The old lady spoke for the first time. I've got that skirt,' she told me, alluding to the one I was wearing (see pic for design). 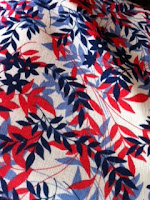 She went on to tell me that she didn’t like it.

Quick as a flash I told her I had a matching top and I didn’t like that either.

Note to self: wear a coat in future!

The old dear wasn’t being nasty, but her remarks had her daughter and me in stitches. When we parted company, the daughter said how much she’d enjoyed meeting me. Our brief and somewhat unusual conversation must have lifted our spirits because I felt the same way. 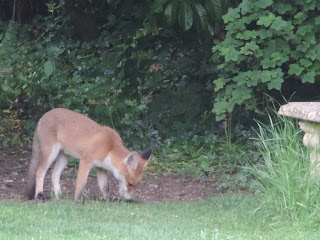 The fox has started leaving presents again. The other day I found a knitted toy, some kind of multicoloured animal, together with a ripped plastic bag in which some kind neighbour had inserted an opened tin of food. Obviously it was something they didn’t like so threw the whole lot out for the refuse men to collect. Anyway, foxy must have caught a whiff because he dragged the bag into our garden and left it there.

He was probably put off by having to get through the plastic bag, or perhaps he had a yen to play with the toy, or maybe he was disturbed in the process. I found it when I went out to feed the birds. Donning rubber gloves (well, you never know, do you?) I gathered it all together. Unfortunately, in the process the contents of the tin fell onto the grass. Oh *** it, I thought, I’ll leave it there and see what happens and then I went away to put the bag and tin in the rubbish bin where it belonged. Heehee HhEEI don’t know which house it came from otherwise I would have handed it back. Checking the wild patch the next day I noticed that all the food had gone.

Should I count that as doing my good deed for the day? 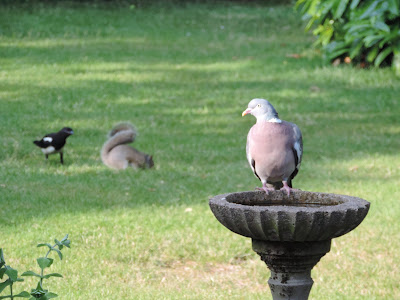 Last evening I witnessed an exciting punch-up between a magpie and a squirrel. The bird was attacking the squirrel who was eating all the nuts. When I say attacking, I mean ATTACKING. He flew into the air and dive-bombed the squirrel several times, but each time the little rodent simply flicked his tail at the bird and went on eating. I wasn’t sure whose side I was on...lol. Naturally I tried to get pictures but this is all I could manage. 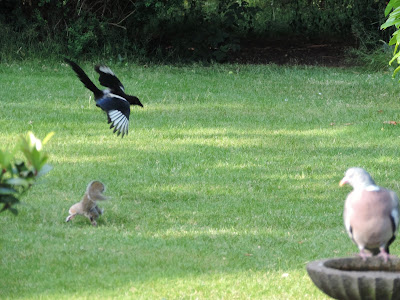 Finally, I thought you might like to see what else I found in the wild patch today.
Aren’t they lovely? 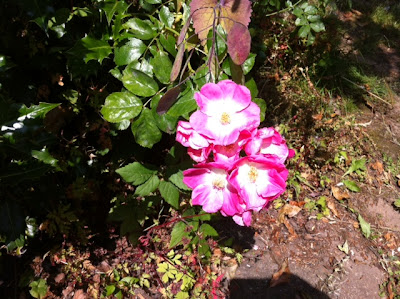 Have a nice day, folks.