The price of vanity! 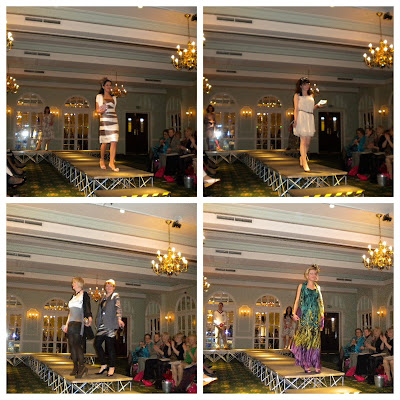 Just the other day a friend and I attended a fashion show put on by one of our largest stores to raise funds for the Breast Friends charity. A good cause that we felt we had to contribute to. The show was held at Moor Hall, my favourite stately home type hotel and eating place. The ambience there was perfect for such an occasion. I made lots of notes of appealing outfits but have yet to explore the possibility of purchase.

However, we did come away with goody bags containing loads of samples for making ourselves look not only more beautiful but youthful too. 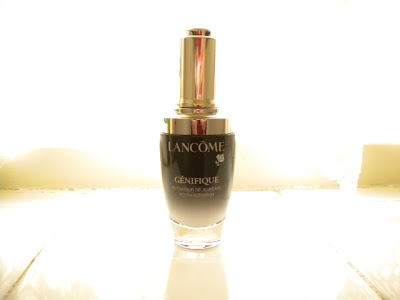 One of the samples was a new award winning product by Lancôme, namely Génifique, a youth activator. These days anything that claims to hold the secret of youthful skin sounds very attractive. I used the sample for several days and I swear I could see a difference. I agree that may be a little over the top but I did enjoy the feel of the product and my skin seemed suddenly to glow with life.

Obviously a trial run was not enough; the treatment needed to be continued forthwith. Under the circumstances it’s perfectly understandable that a trip to town was considered to be somewhat urgent, never mind that a phone call was expected from Australia at 11 o’clock my time. The shopping precinct being a mere stone’s throw away I knew I could be home in good time to take the call.

At the store, stopping only to buy a couple of jackets at greatly reduced price ... well, who can resist bargains, especially since recent weight loss means I have nothing to wear … I headed for the Lancôme counter. A beautiful young assistant told me she couldn’t serve me because the fire alarm was going off. What? I listened … and could just about hear it under the blare of music.

I love music but there’s a time and a place and stores that make frequent announcements to the public should not play music at a pitch where nothing else can be heard. Why on earth we need music playing in stores is a mystery and today proved my point that it’s not only unnecessary but a possible safety hazard. But back to the fire alarm…

When I had decided to go out I didn’t take into account the possibility of mass evacuation of the entire shopping mall. Having been told to leave the store, I automatically went to the nearest escalator which led to the door where my car was parked. Half way down I was called back, ordered to switch over to the one going UP. Then I was hustled out of the store to join the throng of people being ushered away. A continuing announcement told us that an incident had been reported that required evacuation of the Mall, ending with the statement that under no circumstances should we attempt to go back for our cars. Alarm bells continued to go off to demonstrate the seriousness of the incident.

Isn’t it amazing how people talk to each other when there’s a crisis? I was in the middle of a conversation with a couple of folk when my cell phone vibrated in my pocket. It was a text message from Australia to say the intended call could not be made at 11 o’clock, and the caller would ring the next day. Whoops, in the excitement of the evacuation I’d forgotten all about the expected phone call. But what a relief that the call had been put off because there was no way I would get home in time.

I continued to chat with the two ladies, often having to repeat things because of the row made by the non-stop announcement and alarms, but then suddenly the noise stopped. It was all over. Of course we had to wait while all the employees went back to their respective shops and opened for business a second time. I spotted the lovely Lancôme assistant heading back to the store and as soon as permission was granted I went in to make my purchase.

I just hope it was all worth it. On a final note I must praise the security people who dealt with the evacuation. The entire area was vacated in minutes in a fuss-free, calm manner. I was impressed by the professionalism and shall always feel safe when I go shopping in that part of town.
Posted by Valerie at 09:48

Email ThisBlogThis!Share to TwitterShare to FacebookShare to Pinterest
Labels: evacuation, The price of vanity