A book found in a charity shop gave me some reading matter while I had breakfast. It is humorously written as a proper diary so I could read as many or as few entries as I liked, mostly though I found it difficult to put down. Blake is indeed a bad dog but lovable at the same time. The writer, Martin Howard, did a brilliant job of giving the dog a brain along with an aptitude for devilment. It took me back to the training days of my own dogs and the love that went with it. A synopsis of the diary, given below, was taken from the book itself since the description couldn’t be bettered. Today the bad dog’s diary was handed over to another owner because it’s definitely a book to be shared. 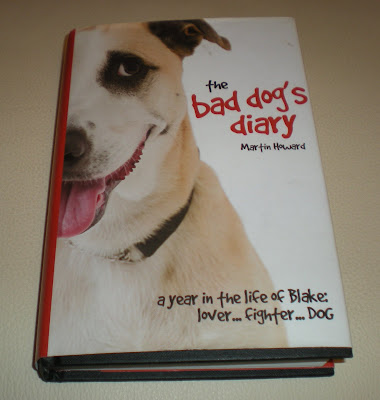 The bad dog's diary by Martin Howard
This extraordinary diary lifts the dustbin lid on a year in the life of Blake – very bad boy indeed – and spread it’s contents all over the kitchen floor. A maverick hound with an eye for the bitches and a flair for strategy, Blake is on a mission to become Top Dog of his neighbourhood while avoiding any hint of obedience to the Owner. Day by day he gives us canine insight into the canine world from a self-professed ‘dog’s dog’, including what it means to be pack leader, living with the threat of castration, what dogs realty think about tinned food, the joys of leg humping, and of course the political and social injustices of the traditional human-dog relationship.

Backed up by a host of friends, including Scottie, a geriatric, sex-mad Westie, and Constable, a dim-witted best-of-breed TV personality, Blake’s plans take unexpected turns as the year progresses. A dog who will be instantly familiar to anyone who has ever found a favourite shoe in slobbery tatters or fended off complaints from their neighbours, Blake is hilarious, wise and often touching. He delves deeply into questions of loyalty, love, war and scooting and along the way shows us exactly why there will always be a place in the human world for dogs.
Posted by Valerie at 08:35

Email ThisBlogThis!Share to TwitterShare to FacebookShare to Pinterest
Labels: The Bad Dogs Diary