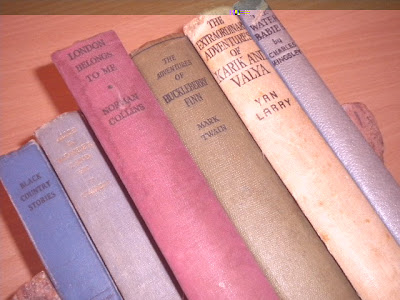 The above books are the oldest on my bookshelf. I keep thinking I should dispose of them but they have a firm hold on me. It would be like removing memories and that’s a very difficult thing to do. Apart from one book, which was given to me by my father, all of them came from the parents’ bookcase. I’m not sure how I got them but get them I did. There were other books that I would have liked to keep but they didn’t come my way. My guess is my mother gave a lot away before she emigrated to , or maybe they were sold in the final auction on the house.

I remember how much I loved the story about Babar the Elephant (Jean De Brunhoff, 1931) and the books about Widgery Winks and his friends (Rodney Bennett, 1901) kept me enthralled for hours. However, I did get to keep the Karik and Valya book – see below. I had hoped my own children would get to read those that I loved but sadly it wasn’t to be.

These are the ones that will stay on the bookshelf until I visit that huge library in the sky. 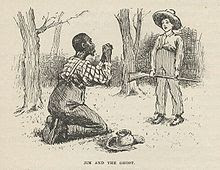 The Adventures of Huckleberry Finn, a novel by Mark Twain, was first published in in December 1884 and in the in February 1885. However, my version is dated 1924. Old enough!

Inside is a Notice, which reads:

By order of the Author (per G.G., Chief of Ordnance)

Huck Finn, the protagonist and narrator of the novel, is around thirteen or fourteen years of age. He is being raised by Miss Watson and the Widow Douglas, both of whom blindly accept the hypocritical religious and moral nature of their society and try to help Huck understand its codes and customs. They represent an artificial life that Huck wishes to escape. Huck's attempt to help Jim, a runaway slave, reunite with his family makes it difficult for him to understand what is right and wrong. The book follows Huck and Jim's adventures rafting down the , where Huck gradually rejects the values of the dominant society, especially its views on slavery.

It is Lewis Carroll’s ‘very own book’ containing stories, poems, and pictures, all his own inventon. When long ago youngsters read in Wonderland it was in the belief that the story was his but the pictures were the invention of his friend, that rare artist, Tenniel. It was not until much later years that the Lewis Carroll Picture Book and the facsimile of the story of , as he wrote it out in his clear handwriting and illustrated it with his own hand, showed what a double magician he was with pen and pencil.

We all know the story of in Wonderland. Don’t we? 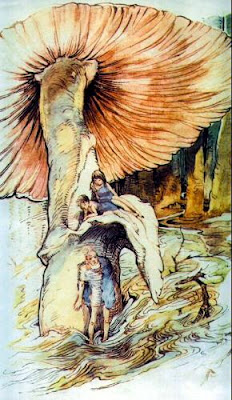 THE EXTRAORDINARY ADVENTURES OF KARIK VALYA by Yan Larry. Translated from the Russian by John P Manderville.

The book was given to me by my father.

In the first episode a boy name Karik and his siter Valya are in the apartment of professor Ivan Germogenovich Enotov. Without permission they take the ‘delicious’ pills invented by the professor and become so small that on a dragonfly’s back they fly away from the room. The professor also takes the pills and goes to find them. The incredible adventures and amazing discoveries in the world plants and insects are waiting for them.

THE WATER BABIES by Charles Kingsley

Written in 1862. No date in the book but it is so old the pages are yellowing.

The hero is Tom, a young chimney sweep, who falls into a river after encountering an upper-class girl named Ellie and being chased out of her house. There he drowns and is transformed into a "water baby", as he is told by a caddis fly (an insect that sheds its skin) and begins his moral education.

The story is thematically concerned with Christian redemption, though Kingsley also uses the book to argue that treats its poor badly and to question child labour, among other themes.

Tom embarks on a series of adventures and lessons, and enjoys the community of other water babies once he proves himself a moral creature. The major spiritual leaders in his new world are the fairies Mrs. Doasyouwouldbedoneby, Mrs. Bedonebyasyoudid, and Mother Carey. Weekly, Tom is allowed the company of Ellie, who had fallen into the river after he did.

Grimes, his old master, drowns as well, and in his final adventure Tom travels to the end of the world to attempt to help the man where he is being punished for his misdeeds. Tom helps Grimes to find repentance, and Grimes will be given a second chance if he can successfully perform a final penance. By proving his willingness to do things he does not like, if they are the right things to do, Tom earns himself a return to human form and becomes "a great man of science" who "can plan railways, and steam-engines, and electric telegraphs, and rifled guns, and so forth". He and Ellie are united, although the book claims that they never marry.

BELONGS TO ME written by Norman Collins in 1945

The story begins in 1938 and records the lives of a group of Londoners prior to WW2, though the story is not about the horrors of war. A diverse group of people struggle with daily life, mostly on paltry budgets. They live in the house of a lonely landlady. The group consists of an ageing glamour girl, newly retired Mr Josser, and other characters, all of them fascinating. The book can be likened to a Charles Dickens novel. I really must get round to seeing the film. 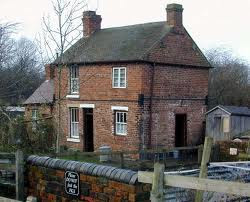 It is an omnibus edition containing five complete volumes. The (I’ve mentioned this before) is an industrial area in the . The name was derived in the mid-nineteenth century from the smoke from thousands of ironworking foundries and forges and from the abundance of coal and soot in the area.

There is humour in the . If you could hear a comedian you would agree. They speak differently to my part of the (which is lush with trees and parks and lakes) and some of the stories in the book have to be read with a translator. But they’re good fun once the art of translation is mastered. Here are a few ... my favourite is the last one, Proud Woman:

Did it well, too

A Bishop asked a country Rector why he wore a violet stole. He said: ‘A parson should always be ‘inviolate.’

‘What was the Vicar asayin’, last Sunday, about ’s wife?’ said one girl to another.

A man was being lowered down a well by the aid of a rope, and shouted to the man who held the rope that he wanted to come up again.

A woman was persuaded to go to for the first time in her life. To cover a somewhat shabby dress she put on a white apron which was also very much worn. During the time that they were singing the well known hymn ‘Holy, Holy, Holy’ she shouted out, ‘It may be ‘oly but it’s clane.’