A Lucky Day Out 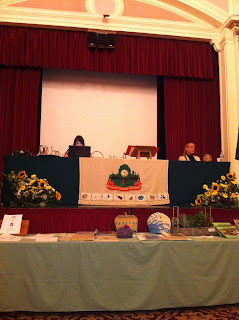 Hi, I'm back. If you want to know what I've been up to recently take a look here.

Yes, it was the Federation's Annual Council Meeting. It was lovely to see all my old friends and acquaintances and receive quite a few hugs into the bargain. The council meeting is not just about business matters, it is the getting together of like minded people and reminding ourselves what a great organisation the WI is.

There was one amusing episode that I must tell you about. Of course, there's always a raffle at any WI event but at council meetings there is also an extra draw called the 200 club. Members buy shares throughout the year and look forward to the weekly or annual draws in case they were lucky enough to win. When I was chairman the treasurer and I upped the rewards, thus making the winnings worth having. At that time I (as Chairman) won one of the top awards. You can imagine my embarrassment when my name was drawn out of the hat.

Yesterday, a similar thing happened when the current chairman drew second prize of £150. Unfortunately my name was drawn for third prize of £100. I was going to ask for it to be drawn again but after listening to announcements about being hard up I quickly decided to donate the winnings to the Federation. There were gasps of surprise from the audience and I spent the rest of the day being thanked by all and sundry for my generosity.

But that's not all... I then won a spot in the raffle. It really was my lucky day, don't you think? The treasurer drew the number and checked the book. She looked at the audience and said 'You're not going to believe this.' Well they had to believe it because I stood up and announced that I was going to keep this one. I came away with a drinking mug, tray and salver as a reminder of my 'winning' streak'. 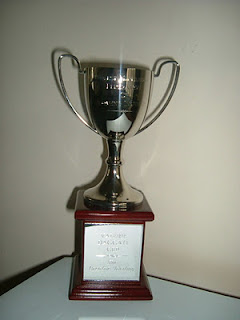 When I was chairman I introduced a new idea for an annual creative writing competition and it is still going on. The winner receives the above cup and a certificate which is presented at the ACM. Naturally I am interested in who enters and who wins. The office send copies of the stories to me but the names are withheld for obvious reasons. I am beginning to recognise the different styles and this year I got it right.. the story I liked the most was the winner.

At lunch time I was approached by the editor of our newsletter. She had decided to quit the job and asked if I would take it on. I thought about it and decided that I would but later, after discussion, I had second thoughts about taking on something that would, by its very nature, be a long term commitment. My spells of long commitment are finished ... it doesn't seem prudent to start over again.
Posted by Valerie at 10:53

Email ThisBlogThis!Share to TwitterShare to FacebookShare to Pinterest
Labels: ACM