NEWS FROM THE HOME FRONT

I'm as proud as punch because, at last, I’ve done it. All my work is now in book form, eight books in total. I think I mentioned before that I am donating some to the WI auction on Thursday, it will be interesting to see members reaction, if any. The Townswomen's Guild (henceforth referred to as TG) has asked me to read one of my stories at the birthday meeting. I’m honoured to be asked but it poses a problem ... which one shall I read? Decisions, decisions!

Joe came out of hospital last week and we have a district nurse coming in once a week to do what's necessary.

On Saturday I took him out to lunch. He paid, of course, but I took him! We had a lovely meal and it was great to be out together in a pleasant environment instead of talking by a hospital bed. We treated ourselves to starters of soup (him) and spinach and cheese etcetera (me), followed by a sea-bass meal and exotic desserts – a mess of fruit compote and meringue for him and panna cotta for me, with floater coffee to die for.

Our table faced the lake where experienced and novice sailors navigated their yachts. Although the sky was filled with heavy clouds the sun’s brilliance showed on the water. I tried to get a decent picture of it but window frames and half drawn blinds were an obstruction. I’ve cropped the pictures in an attempt to show the scene rather than the restaurant windows. Foolishly I'd gone out without thinking I might get some good photo shots so I only had the phone camera with me ... yeah, I know, I’m an idiot. 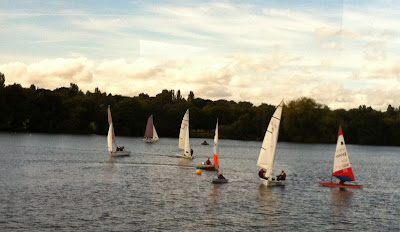 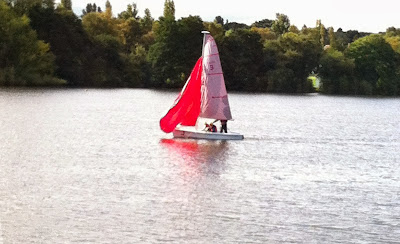 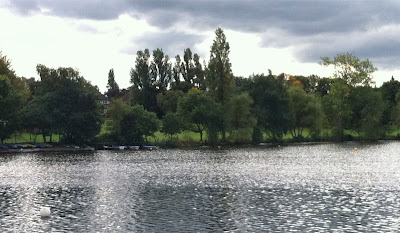 Mel, you will be pleased to know that I’m sticking with the cleaner. She’s GREAT, well at half my age she should be, don’t you think? Last week I asked if she would concentrate on my work room/office, which is always the last place to get much. Before I knew what was what, the girl had the nets down and was cleaning the windows. That was after she vacuumed throughout the bungalow, mopped the kitchen floor and my rather large laundry room. Oh to have youth at one’s side! I love her to bits.

I am now a dab hand at ordering groceries on line; just had my third delivery. It’s great that I can have it all delivered when I want it and not have to wait for them to decide. If I forget something it’s no sweat to pop out to the local store and at least I don’t have to break my neck to do it.

Any more tips, Mel, and I’ll be pleased to consider them... yeah!

It always takes a while to get into the swing of things when joining a new outfit but after a year’s attendance I now feel at home at the TG monthly meetings. What is noticeable is the difference in people. The last meeting I attended is a case in point ... after telling one or two about Joe’s medical condition the word spread and lots of women came to me at the end to give their best wishes. That’s more than they do at WI. Members there are a lot more reserved.

For several years Joe has played a part in the local institute by checking their books at year end and giving the benefit of advice, so I guess something will be mentioned at the next AGM. He hasn't exactly pulled out but it has been suggested by letter that it might be in their best interest to find someone else, purely as a just-in-case situation.

My eyes have been opened lately, surprisingly so. I have been a member of the WI for 21 years, a comparative newcomer compared to some, and always thought the organisation was the be-all-and-end-all of establishments for women. That is until I met Marion, an old WI colleague who had also joined the Townswomen’s Guild. She invited me to go along. After retiring as WI County Chairman I was at a loose end with regard to outside commitments so I took her up on the idea.

Marion was with a different WI for many years, until it was closed for lack of officer support. The usual story, nobody wanting to take office and run the institute so it had to be suspended and then closed. Not wanting to lose out on WI altogether Marion and a few others joined another local institute and invited me along. And you should hear them complain: it’s cliquey, nobody speaks, we can’t hear what’s going on, this isn’t for me, are complaints thrown around every month ... and I thought it was only me that noticed!

It is said that fame goes before you. One thing I’ve discovered is that an ex-County Chairman doesn’t fit in easily. Joe said that would be the case but I didn’t really believe it. The President of the WI in question, who was once very friendly, now keeps her distance and if I dare make suggestions (requested) about, for example, raising much needed funds, she responds with a look which I interpret as a sort of ‘who do you think you are’ attitude.  Perhaps she thinks I might dictate rules or something. Well, far be it from me to do such a thing. It’s all very off-putting but there's some consolation in knowing that other ex-chairs have experienced similar things. I cannot see the TG ladies behaving in that way... they are much more relaxed and waste no time bending a few rules if the mood takes them.

It’s a shame, because the WI is a fantastic organisation that does a lot of good for communities far and wide. Maybe in time, with new and younger blood coming in, things might change. Maybe younger members won’t learn how to whinge or constantly complain about rising fees, or maybe they will pass on their untainted views and teach the oldies a thing or two. We can but hope.