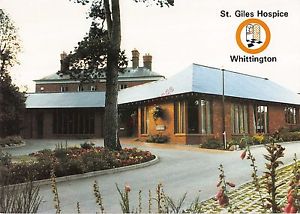 Although I had heard of hospices, I didn’t know what they actually did until my Joe was sent to one. I really thought it was some kind of hospital but geared towards end of life. You can imagine my surprise, therefore, when I found out that they don’t attempt any cures but simply make things easier for their patients. They certainly did that for Joe and me, as I was to find out.

Under normal circumstances he would have loved his room. It was private, nicely decorated, with separate shower and toilet in a well fitted room adjoining his bedroom. An enormous television and radio on the wall, There were four easy lounge chairs and a coffee table. A door led to a small private patio overlooking the gardens where patient and visitors could sit out on a fine day. Honestly, it was more like a hotel room.


One day I was approached by two members of the nursing staff. After introducing themselves one of them asked ‘Would you like a massage?’ What? Seeing my hesitation, I was told that I could just have my shoulders massaged if I didn’t want the whole programme. Naturally I asked ‘Why me?’ to which they explained that they had found that the carers needed as much attention as the patients. Actually the invitation came too late as Joe died the following day. I didn’t get the massage but I got plenty of loving attention and help as well as a pack of tissues for the tears.

So now, just over a week after the funeral I am busy sorting out the house. Joe, bless him, had a tidy mind and that’s where his tidiness stayed. It has given me some sort of pleasure to strip his office room of stuff he accumulated over the years. Client files (remember he was an accountant) some of which dated back to the early 2000s. Fortunately I’ve got a good solicitor!

Years ago I bought Joe a lovely desk on which he could work. He loved it. He loved it so much he kept it covered, not as you might think with a cloth – no he used bits of paper, envelopes, folders, letters, special account paper, envelopes, scraps of paper, pens and pencils, rulers and rubbers, and a magnetic paperclip holder. There were pots and cartons and dishes holding small things, like caps of biros (the pens themselves long since lost or worn out), rubber bands, erasers, charity badges, corks from medicine bottles, the odd gift card or two, some marbles, oh and the bottom part of a set of false teeth. Don’t ask! Yet he never lost anything. He knew where everything was – even the teeth – but many’s the time if I asked him to get a cup out of the cupboard he would ask which cupboard!

I have heard that brilliant brains have untidy minds. I never could work that one out but I guess there’s some logic somewhere.

You should see his room now. I have rehoused everything so that I know where it all is and it looks TIDY. Now that I can see the desk I’ve quite taken quite a fancy to it. It would be ideal to do my colouring on. If I promise not to mess it up with ink from fibre pens perhaps he wouldn’t mind me taking over. After all, if there was a speck of colour somewhere I could always cover it with bits of paper.  Couldn't I?