IS THE FIGHT OVER?

I write this post at the risk of upsetting squirrel fans, in particular my good friend Ron who adores them.

I have written before, many times, about the squirrels and the problems they cause. However, where I live it only applies to those that scoff all the bird food. I have tried various ways to stop them getting at all the delicious seed and nuts, (thus preventing birds from feeding) to no avail.

It’s not just the stealing of food that bothers me, it’s the fact that as well as having to fork out for bird food, I must also replace feeders on a regular basis. There’s only so much money in the bank so I continually search for solutions to the problem.

I have tried banging on the window to scare the pests away. I have tried screaming, ringing a cow bell, clapping hands, slamming doors, to no avail. As soon as I stop the squirrel or squirrels jump once more into action.

A week ago, as I was preparing to sort the refuse bin ready for collection, I spotted a squirrel jumping onto the birds feeding station. I happened to have a black plastic bag in my hand which I waved in his direction. Oooh he didn’t like that; scarpered as fast as he could. Oooh, I thought, better keep a black bag handy for future scares. It worked. I only had to wave the bag and the squirrel scooted - couldn’t get away quick enough – but if I went out without the bag he stayed put. 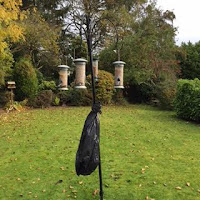 Just the other day I gave it serious thought. Why not tie the bag to the station, a bit like flying a flag. Well, reaching the top would have been a problem, me being quite small in stature and not agile enough to stand on steps. So this is what I did, I tied it to the middle section of the pole which is how the squirrels get up there. I reckoned he wouldn’t be able to get a grip on a pliable bag that kept shifting in the wind.

Three days later, still no squirrel. Correction: I saw him, or rather ‘them’, but only on the bird table upon which I put seed for bigger birds. Okay, so he still got fed… but it stopped him from damaging the expensive feeders which was my aim. I patted my own back for hitting on a solution but deep down I wondered if a committee of squirrels was at work trying to solve their problem.

I was right not to get too complacent since in the approaching dusk I saw the squirrel leap and successfully land on one of the feeders where he proceeded to scoff the seed, that is until I shot out, screaming and ranting and threatening him with his life. He didn’t hang about, mainly because in my hand was another black bag.

Oh well, back to the drawing board I went, but for short term measures I kept the black bag right by the patio window because one shake was all it took to send squirrel into a dramatic fleeing performance. The only problem was having to be on watch all the time although squirrel saw to it that I didn't have to wait long before finding another way round the problem. He did no more than unhook two of the robust squirrel-proof feeders and smashed them on the ground.
While all this was going on I had had a new fence erected in the garden (see picture above) which pushed me into purchasing a new bird table (see picture above). It was cheap and pretty so it was off with the old and on with the new. Let's see how long it takes the squirrels to wreck it like he did the first one I had. 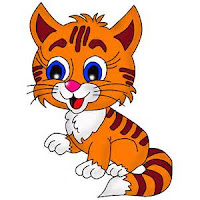 Cats sulk quietly in their beds
They do not draw attention to their unhappiness
by huffing loudly and banging doors
Posted by Valerie at 07:00

Email ThisBlogThis!Share to TwitterShare to FacebookShare to Pinterest
Labels: squirrels