Joe and I normally do the big weekly shop together but for one reason or another he wasn’t able to go for two to three weeks. In view of that don’t you think it’s disgraceful that there was no red carpet or flying banners next time we went?

One of my recent purchases was a packet of wild pink pacific salmon, all ready to cook-in-the-bag. Even though it cost an arm and a leg it was delicious. The size of the box made me wonder if we’d got the whole fish but it was just a well sized portion. So thank you to the guy who waded into the pacific with his fishing line. You can do that again, with my blessing.

People often ask how I write short stories and where I get my ideas from. The main thing they want to know is if I start off with a plot’ and they look aghast when I say no. Most of the time it’s true. Usually I start with an opening sentence and take it from there. As I have tried explaining, and this is endorsed by many famous writers (one such being Lee Childs), it is the characters who dictate the story. When I wrote the longer stuff I did have scenarios to work on but never finished the way I intended because the characters wouldn’t allow it. The story had to go their way. It had to suit their temperament, their ideas. For example, I might have dreamed up a storyline that was completely alien to the character I invented ... which inevitably meant I had to change the original idea. It’s uncanny, though, not knowing where a story will end.  I have learned not to dwell on things, just to let them happen ... it suits paranormal since anything can happen when writing in that genre. 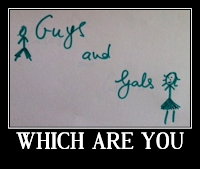 Why is it that these days a collection of women are referred to as guys? Why don’t waitresses and the like address us as gals? I can (almost) understand it if the company is mixed but not when it’s a gathering of just one sex. I wonder what would happen if members of a men-only group were referred to as gals?

There is such an incidence of child murder these days, in particular parents murdering their own children.  It is acutely worrying since the various agencies don’t seem able to prevent it. Whenever I do some ironing I frequently remember my mother, who taught me to do that particular chore. Woe betide me if I got a crease in the wrong place, or missed a bit, or wrongly folded a sheet or tablecloth so that diamond patterns appeared when the article was opened out. I wasn’t just told off, I was beaten to an inch of my life. Or so it seemed. One of my punishments was to have my head continually bashed against a Welsh dresser by repeated punches to the chin. Yes, my mother would have made a good boxer. I was lucky, I guess, that she didn’t go the whole hog and kill me off.

In mother’s defence, she was a sick woman, forever taking overdoses and slimming tablets and driving my dad to distraction. Later it was discovered that she had a thyroid problem. I owe her something, though, since life with her provided fodder for some of my tales.

Being the age I am I can afford to be flippant about my upbringing, but if the scenes could have moved forward several decades my mother could well have become a killer. That statement suggests society is to blame, although I fail to see how that can be so ... surely we are all responsible for our own actions?

Email ThisBlogThis!Share to TwitterShare to FacebookShare to Pinterest
Labels: FOOD FOR THOUGHT