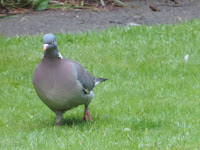 I’ve seen it all now:

One woodpigeon in the road, defying me to run over him. I didn’t, but I pushed him to the limit. Eventually he flew off but not soon enough to stop drivers behind me from sounding their horns.

Tell the truth now, would you have driven on?

I thought low-slung trousers were going out of fashion?

After walking behind two young men and having an almost full view of their NAKED butts it seems I was wrong.

There’s a lovely hilly road round the corner from my house, its whole length taken up with overhanging Horse Chestnut trees on either side. The trees make it look good the whole year round but parked cars and traffic lights spoil it, especially when lights are on red.

The problem lies with double yellow lines which in the UK mean no parking at any time. The lines start roughly two car lengths from the lights, on a bend, and then the line of parked cars starts. Cars coming across the lights from the other direction have to negotiate not only the bend but the line of cars as well, because drivers waiting to cross are forced into the middle of the road. It’s hazardous and definitely an accident waiting to happen. No-one is breaking the law but you would imagine motorists would think twice before parking so near the lights.

The last time I went down the hill I had to pull in to let a fire engine go by and I thanked the good Lord that whatever the problem was it wasn’t near the traffic lights!

A good many years ago I wrote to the council asking if the yellow lines could be moved back, stating the reason in full; the reply was that they couldn’t do it because it was a legal matter and to get it changed would be extremely costly. Yellow paint? Moved back one car length? Seems like an easy job to me, but who am I to argue with the law, except I could be the one involved in an accident.

This poem was brought to mind by the memory of the racing fire engine.

MATILDA
WHO TOLD LIES, AND WAS BURNED TO DEATH

Matilda told such Dreadful Lies,
It made one Gasp and Stretch one's Eyes;
Her Aunt, who, from her Earliest Youth,
Had kept a Strict Regard for Truth,
Attempted to Believe Matilda:
The effort very nearly killed her,
And would have done so, had not She
Discovered this Infirmity.
For once, towards the Close of Day,
Matilda, growing tired of play,
And finding she was left alone,
Went tiptoe to the Telephone
And summoned the Immediate Aid
Of London's Noble Fire-Brigade.
Within an hour the Gallant Band
Were pouring in on every hand,
From Putney, Hackney Downs, and Bow.
With Courage high and Hearts a-glow,
They galloped, roaring through the Town,
'Matilda's House is Burning Down!'
Inspired by British Cheers and Loud
Proceeding from the Frenzied Crowd,
They ran their ladders through a score
Of windows on the Ball Room Floor;
And took Peculiar Pains to Souse
The Pictures up and down the House,
Until Matilda's Aunt succeeded
In showing them they were not needed;
And even then she had to pay
To get the Men to go away!

It happened that a few Weeks later
Her Aunt was off to the Theatre
To see that Interesting Play
The Second Mrs. Tanqueray.
She had refused to take her Niece
To hear this Entertaining Piece:
A Deprivation Just and Wise
To Punish her for Telling Lies.
That Night a Fire did break out--
You should have heard Matilda Shout!
You should have heard her Scream and Bawl,
And throw the window up and call
To People passing in the Street--
(The rapidly increasing Heat
Encouraging her to obtain
Their confidence) -- but all in vain!
For every time she shouted 'Fire!'
They only answered 'Little Liar!'
And therefore when her Aunt returned,
Matilda, and the House, were Burned.