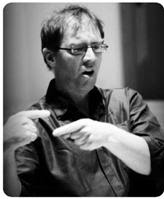 “Paul Whittaker was born in Huddersfield in 1964 and has been deaf all his life. He plays the piano and organ and has also trained choirs. Paul has a music degree from Oxford University, a post-graduate diploma from the Royal Northern College of Music, Manchester, and in 2007 was awarded an OBE for Services to Music.

For 18 years Paul was a theatre interpreter and in 2010 gave the first ever signed performance at the BBC Proms – “Sondheim at 80.” Paul continues to work with the Edinburgh International Festival, Rambert Dance Company and The Sixteen choir.

As Music and the Deaf’s Artistic Director Paul is responsible for the creative and artistic development of the charity. For the past 4 years he has been very involved in Sing Up, of which Music and the Deaf was a flagship organisation, encouraging people to both sing and sign and creating signed song resources.”

The above extract was taken from Music and the Deaf  website

Paul Whittaker is an incredible man, full of fun, and adored by all. Most of the WI Federations invite him to speak at their yearly council meetings, mine included. I had seen him several times before and decided that it was a must to get him to speak to my members.

Bookings, of course, were made through the Music and the Deaf office but imagine my surprise when Paul himself rang me at home to check the arrangements. It seemed strange to be talking to a profoundly deaf man but it turned out that he was reading everything I said on a screen.  He made some joke about it which I’ve now forgotten but I do remember we ended up laughing. He’s that kind of man, always puts people at ease.

On the day of our Council Meeting he arrived with his translator friend who I will refer to as Dan because I forget his real name. He was a nice guy with a great sense of humour as you will see later. They had been invited to lunch before the afternoon session but were late arriving.

Lunch was taken in a private room and usually included the Lord Mayor and Lady Mayoress, other dignitaries, invited guests and speakers, all in their best gear or uniform. Paul and Dan arrived towards the end of the meal, both dressed in tee-shirts (with logo) and jeans. Paul said to me ‘Goodness, looks like I’m overdressed.’

After lunch Paul was introduced to the women and he began his talk from the stage. Because of his deafness, his speech was slightly distorted but we understand him alright. He talked about his childhood and how he learned to cope with deafness, again with that thread of humour running through, and then described his involvement with Music and the Deaf. He played the piano, which went down well with the audience, and ‘sang’ by signing. Watching him signing was not only interesting, it was really moving and quite emotional. From my position on the stage I could see one or two members dabbing their eyes with handkerchiefs.

Afterwards there was the inevitable Question and Answer time, the idea being that Dan would communicate by sign language anything the members asked and Paul would reply. Sometimes the answers were serious but quite often he introduced an element of humour. 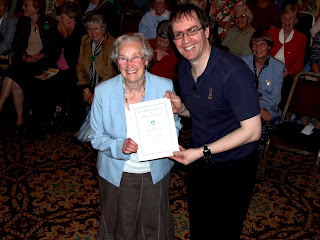 Usually when we had interesting speakers, or at least one who likes to participate in what we’re doing, we would ask if they’d take part in presenting prizes, drawing the raffle etc. Naturally we invited Paul to do the same. He was so much fun we knew it would be a success. 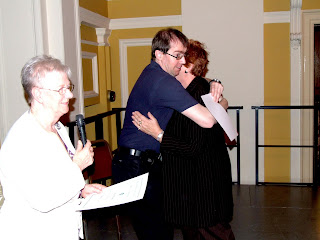 Those that are about to be presented with trophies or certificates are assembled in an organised queue at the side of the stage. When names are called they come on stage to pick up their award. One lady who was next to go forth could be seen by the audience but not by Paul. For the benefit of her friends in the audience she decided to play up by preening, tapping hair in place, puckering lips, adopting a come-hither expression, and adjusting her dress.

What she didn’t realise was that Dan was communicating all this by sign language.  Imagine her surprise when she walked on the stage and Paul made a beeline for her, kissing her cheek, hugging and swinging her round, while the members dissolved in fits laughing. Bet she never does that again!

The occasion went so well we invited Paul and Dan to other functions. He never let us down and was always amusing and kind-hearted. The women loved him and so did I.

It was around this time that Paul was presented with the OBE and there’s a great snippet on the video where he’s travelling to Buckingham Palace by car.

To end here's a video of Paul signing a Christmas Carol.