Ron’s recent post (here) reminded me of an incident that occurred years ago, one that restored my faith in human nature.

I was alone in the world, just me and my baby. Most of my family, a religious lot who disapproved of broken marriages, turned the other cheek on many occasions and it got so I didn’t even bother asking for help. Only Aunt May and her daughter, and Catherine, wife of an uncle who had the biggest cheek to turn, took the time to care, encourage and give advice when needed. It hardened me somewhat and it got that I didn’t ask anyone else for assistance in case of rebuff. I became self-reliant, which isn’t a bad thing, but didn’t acquire proficiency straight away.

It was the winter of 1963, a record-breaker with deep snow and ice lasting for months on end. It even snowed on my birthday in May. As you can imagine, everyone was fed-up with it.

When the break finally came I was determined to go out. The sun was shining and the urge to take my baby out was huge. I decided to go and see Aunt May, which meant two buses, and which also meant I could not take the pram. Prams in those days weren’t designed to fold up! It was walk or nothing with the old Silver Cross coach built perambulator. 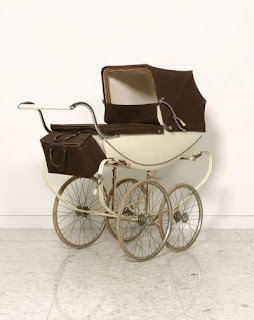 It had been a long time since I saw the big shops and the crowds and I felt quite excited. What I hadn’t counted on was rain. Fortunately I was prepared for the inevitable, although dealing with it and carry bag and baby at the same time proved to be quite difficult. I remember standing on the step of a shop (couldn’t get in the actual doorway) and dropping my bag on the floor in an effort to give full attention to covering my little son.

After taking one look at me and my struggles, a middle-aged lady rescued me.  She started off by covering my head with a carrier bag. I tried to shrug it off, asking her instead to help with the baby, but she said ‘Look at him, he’s well covered. Now tell me, who’s going to look after him if something happens to you?’ She then gave me a lecture, kindly, about giving myself as much attention as I gave my son.

I never saw the woman again but I never forgot her kindness or the fact that she took time, in pelting rain, to make sure we were alright.

She taught me a lot in a roundabout way. Thereafter, because her concern had shown me the way, I always wanted to help the mother rather than the child. Even now, when I see a newborn, the first thing I do is to ask the mother how SHE is. Only then will I go gaga over her child. I am always happy to see their surprise at being asked because, let’s face it, they often have difficult days as well.